Progress in Catalysis for Industrial Applications

#These authors contributed equally to this work.

Catalysis is the process of enhancing the rate of transformation of chemical compounds into other products on selective catalysts. It is a fascinating technique utilized in the environmental and petrochemical industries. This review summarized the current progress in the oxidation of Volatile organic substances (VOCs), NOx reduction, dry and steam methane reforming, and the Fischer-Tropsch synthesis (FTs). The catalysts’ preparation techniques, characterizations and reaction mechanisms were underlined. This work identified primary causes of catalytic deactivation, such as carbon deposition, sulphur/alkali poisoning, adverse water effects and ways to improve catalytic performance in the phase of such negative effects. Over the past four years, publications on catalysis were found to be approximately 63%, 24%, 7%, and 26% for VOCs oxidation, NOx selective conversion, FTs, and methane reforming, respectively. Finally, future perspectives were highlighted, such as the doping of a catalyst with N, Br, and Si, to improve catalyst performance and the designing of characterization techniques such as Helium ion microscopy, Raman spectroscopy, and Electron energy loss spectroscopy to study the detailed properties of the catalyst. More research on developing a new catalyst to convert low-priced chemicals into high-demand chemical products, alkane to alkene, at low temperatures were also covered. 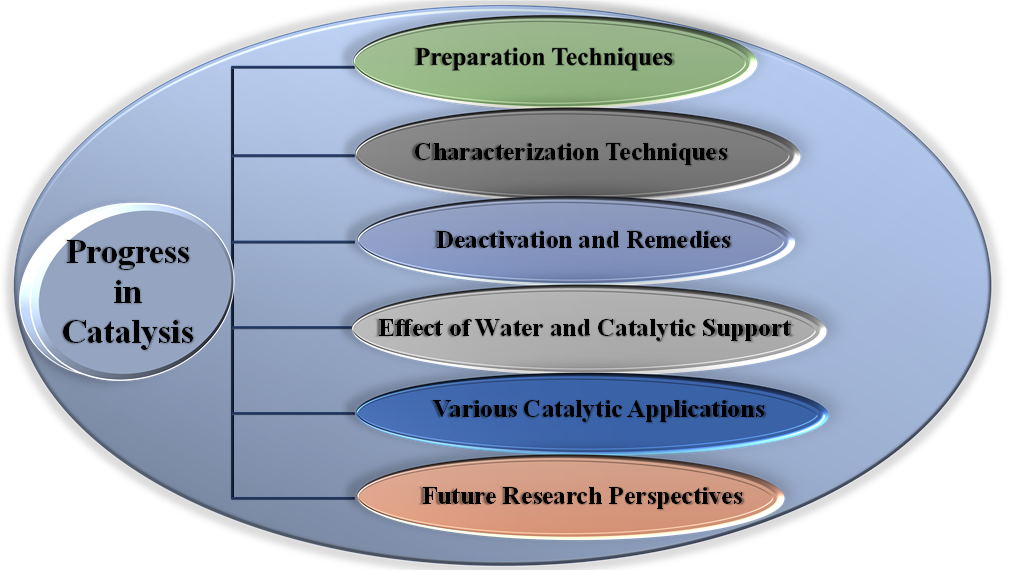 This review provided the recent research publications in catalysis for environmental control and pet....

This review provided the recent research publications in catalysis for environmental control and petrochemical industries, and highlighted research prospective that require great attention.