Most existing thermoelectric materials exhibit high performance only within a narrow temperature window. Among them, bismuth antimony telluride (BiSbTe) is a typical p-type thermoelectric material working near room temperature, but its performance decays rapidly with increasing temperature mainly due to the bipolar thermal transport. Suppressing bipolar thermal transport normally requires delicate manipulation of band structure, possibly achievable through well-engineered extrinsic doping. Here we present a straightforward approach to dope BiSbTe with earth-abundant CuO. Different from embedding CuO nanoparticles that were extensively reported in the literature, we observed that Cu and O atoms dissociate after spark plasma sintering. Density-functional-theory calculations reveal that it is the substitutional Cu at Sb/Bi sites and the interstitial O impurities that induce holes and increase carrier concentration as well as the power factor. The increase of hole concentration strongly suppresses the bipolar thermal conductivity. To the best of our knowledge, this is the first theoretical demonstration of p-doping of bismuth telluride thermoelectrics from oxygen. Meanwhile, the Cu defects and O impurities strongly suppress the lattice thermal conductivity. As a result, the obtained material possesses optimized zT over a much wider temperature range with well-controllable peak temperature as a function of CuO concentration. 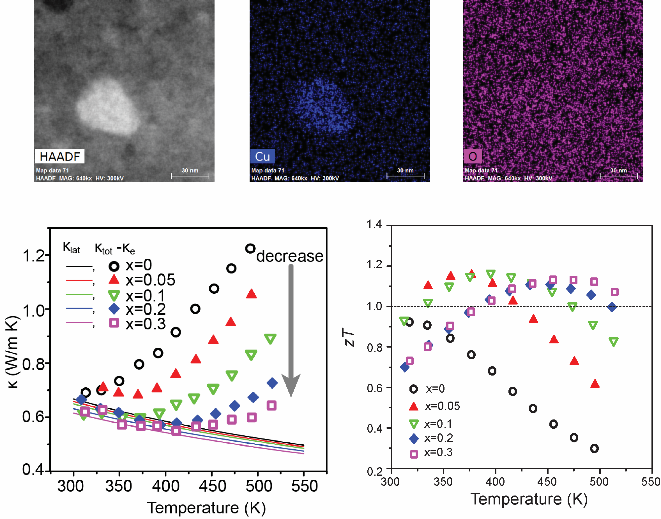 Cu and O atoms dissociated with CuO p-doping BiSbTe and we demonstrated the p-doping from both eleme....

Cu and O atoms dissociated with CuO p-doping BiSbTe and we demonstrated the p-doping from both elements using DFT calculations.