DFT Studies on a Novel 1-Ethyl-4-phenyl-1,5-benzodiazepin-2-thione Molecule and Its Derivatives for Opto-nonlinear Applications

Herein, we have studied new 1,5-benzodiazepin derivative named 1-Ethyl-4-phenyl-1,5-benzodiazepin-2-thione] (EPBZ) and designed its several derivatives using chlorine (Cl), fluorine (F), bromine (Br), OH, CH3, OCH3, NO2, NH3 groups and a comparative investigation has been presented. The geometries of EPBZ compound and its derivative were attained using Becke three-Lee–Yang–Parr (B3LYP) density functional theory (DFT) with 6-31G** and the results indicated their stability. Absorption spectra possess only one absorption peak(s) at ~ 260 nm attributed to π to π* transition in UV region for all molecules. However, the highest-occupied molecular orbital (HOMO) in EPBZ and its derivative products occurs in one of benzene ring and the substituents, the reverse happen in the case of lowest-unoccupied molecular orbital (LUMO). The antibonding π* in LUMO and its next orbital of HOMO-LUMO are usually confined in two benzene rings which prolongs over the entire molecule. In the case of derivatives, the HOMO–LUMO gap lies within 3.38 and 4.01 eV, which is comparatively lower than primary EPBZ. EPBZ and its derivatives possess higher βtot values compare to urea, though the largest value of βtot is noticed for EPBZ-NH2 derivative compared to all which is ~ 2060 times higher than that of urea. EPBZ-NH2 derivative βtot value is very high which suggest its use in nonlinear optical (NLO) applications. 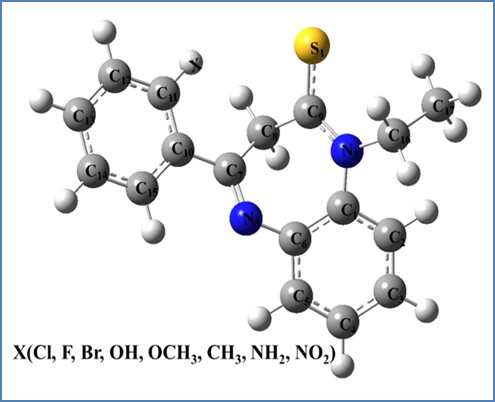 DFT approach is applied to study the key features of a novel 1-Ethyl-4-phenyl-1,5-benzodiazepin-2....

DFT approach is applied to study the key features of a novel 1-Ethyl-4-phenyl-1,5-benzodiazepin-2-thione] (EPBZ) molecule and its number of derivatives for opto-nonlinear applications for first time. Molecular geometry, Optical, HOMO-LUMO and NLO properties are reported. TD-DFT method is used to study the photophysical properties of EPBZ and its derivatives. Detailed HOMO-LUMO study is reported. The prospective of EPBZ is exploited as efficient nonlinear optical material.