Perovskite solar cells (PSCs) with SnO2 electron transport layer (ETL) still face the challenge of low efficiency with serious hysteresis due to the nonradiative recombination at the SnO2/perovskite interface. Herein, a self-assembly modification layer with multifunctional properties using L-Cysteine (Cys) is applied to solve the above issues. Through applying this novel self-monolayer between SnO2 and perovskite film, the trap state is greatly alleviated as well with an enhanced charge extraction. In addition, the naked -NH2 and sulfur atom of this monolayer will affect the crystallization dynamics of perovskite film, resulting in an improved film quality. Compared with the control device with a PCE of 18.55%, the monolayer contacts engineered device shows a significantly increase PCE over 21% along with negligible hysteresis. More interestingly, monolayer contacts engineered PSCs exhibit superior stability that over 90% of its initial PCE remains after stored at 50% relative humidity for 50 days. This work provides a promising method to fabricate planar n-i-p perovskite devices with high efficiency, stability, and repeatability. 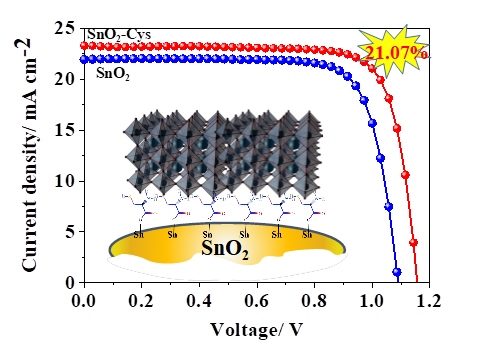 L-Cysteine anchored on the SnO2 surface to form a bridge between perovskite and SnO2 to realize effe....

L-Cysteine anchored on the SnO2 surface to form a bridge between perovskite and SnO2 to realize effective charge transfer.