ZnSe as an II-IV group has attracted attention as a binary semiconductor material due to its superior chemically stability than other semiconducting materials such as ZnS. In this work, ZnSe thin film was synthesized using a simple, clean and relatively inexpensive monochromatic photochemical synthesis method at room temperature. The structure of the ZnSe films deposited under different coloured illumination was confirmed by X-ray diffraction and the effect of the monochromatic light on the growth rate was observed. The SEM result was demonstrated different morphology of the different films' surfaces, such as granular spherical, cauliflower, fiber, or wire, with a variety of porosity that was achieved by a simpler photochemical route. A change in the optical bandgap between 2.72 eV and 2.82 eV is observed for the red, green, blue, white light, and darkness conditions. And it is further reduced for samples annealed in the air for 2 hours at 100 °C, and 200 °C indicates improved crystallinity. The obtained result suggests that synthesized material can be used for photoelectrochemical solar cells. 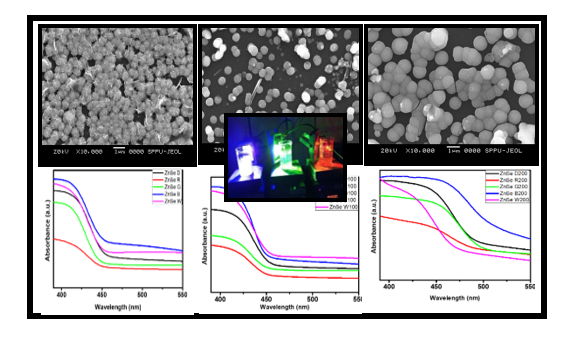 In this work, ZnSe thin film was synthesized using the monochromatic photochemical synthesis method at room temperature for DSSC application.