Silicon monoxide (SiO)@C@carbon microspheres (CMSs) composites with core-shell structures were prepared by the hydrothermal method combined with subsequent heat treatment, using glucose as a carbon source. SEM analysis showed that this process resulted in SiO particles that were uniformly coated by the pyrolytic carbon layer and surrounded by CMSs. With increasing quantities of glucose added, the cycle performances of SiO@C@CMSs composites were improved remarkably, with a moderate amount of glucose addition resulting in the greatest performance. Specifically, among the four composite samples, SiO@C@CMSs-2 had the best cycle performance, delivering a high initial capacity of 1024.5 mAh g-1 at 50 mA g-1 and a specific capacity of 638.6 mAh g-1 after 60 cycles at a current density of 200 mA g-1. Even at a current density of 1.5 A g-1, it was still able to deliver a reversible capacity of about 450 mAh g-1. This was attributed to the formation of mesoporous carbon coating and CMSs by the hydrothermal synthesis of glucose. The mesoporous pyrolytic carbon coating of glucose increases the lithium ion diffusion rate and improves the conductivity of the material. At the same time, the volume expansion of the material during lithiation/delithiation is restrained by carbon coating and the CMSs serve as a buffer to alleviate volumetric stress. Therefore, SiO@C@CMSs-2 is a stable material with improved cycle performance. 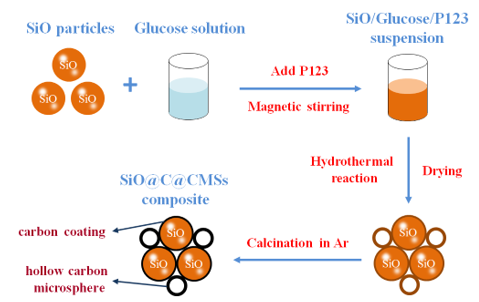 Core-shell SiO@C@CMSs composite was prepared by the hydrothermal method to surround micron-sized SiO....