Polymerization of aniline (AN) is carried out with ammonium persulfate under influence USI in cadmium sulfide (CdS). USI offers us a different technique to prepare polymer/inorganic composites. Polyaniline (PANI) is polymerized on the surface of CdS, which results in the formation of composite of PANI/CdS structure. Nucleation growth of composite particle takes place under USI treatment. The resulting composite particles of PANI/CdS are sphere-shaped and the magnitude varies along-with concentration of CdS. The particles of PANI/CdS composite were synthesized by chemical route which has cumulative structure and which is dissimilar from that attained under USI treatment. USI is able to break the aggregation of PANI/CdS composites. USI can enhance the composite proportion. When there is polymerization of PANI on the exterior surface of CdS, microfiber behavior of PANI is disturbed and the extent of polymerization reduces. X-ray diffraction (XRD) confirmed formation of composite of PANI/CdS and explains effect of USI on the composite of the two. Under USI treatment, it is deduced that although both the materials retained their crystal structures yet from the XRD of composite it is apparent that their crystallinity decreased significantly. Transmission and Scanning Electron Microscopy analysis conducted over the composite supports the results of XRD. 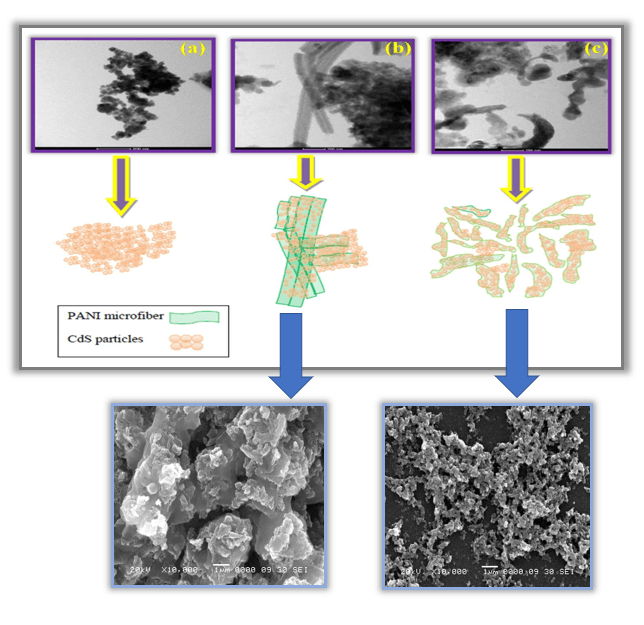 Polymerization of aniline is carried under influence of USI in CdS. Resulting composite has decrease....

Polymerization of aniline is carried under influence of USI in CdS. Resulting composite has decreased crystallinity but structure is retained.