The district of Nainital in the state of Uttarakhand in North India has experienced several landslides in the previous decade due to its diverse geomorphology. Several lives have been lost and substantial damage has been caused to livestock and property due to these landslides. Machine Learning algorithms have been used in several studies earlier for the creation of landslide susceptibility maps (LSM) for classification of regions prone to landslides. This study aims at creation of a LSM using the Maximum likelihood (ML), ISO clustering (ISO) and Random Forest (RF) algorithms. The landslide conditioning factors (LCF) viz., slope angle, slope aspect, curvature, distance from stream, altitude and Land Use Land Change (LULC) have been analyzed in detail for the generation of the LSM. According to the results of this case study, the highest positive predicted value (PPV%) of 83% is observed for ISO algorithm with slope angle considered as LCF. The ISO algorithm with distance from stream LCF has the highest negative predicted value (NPV %) of 83%. The ISO algorithm with distance from stream LCF has the highest sensitivity of 84% and the ISO algorithm considering slope angle as LCF has the highest specificity of 84%. A Kappa index of 0.79 has been computed for ISO clustering using slope angle as LCF. It has also been observed that, of all the values of frequency ratio for the various classes of LCFs, slope angle gives the highest value of 3.4 for the class of 25 – 35 degrees. Further the ISO algorithm outperforms the ML and RF algorithms in terms of AUC with a value of 0.817. 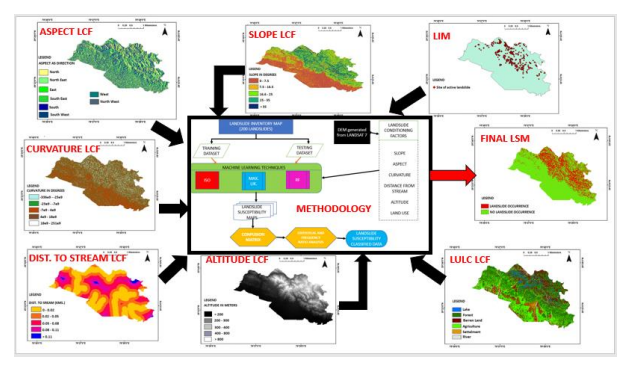 This article looked into the landslide prone region of Nainital and created its Landslide Susceptibi....