A Study on the Effect of Radiometric Variations on a Fuzzy Stereo Matching Algorithm: A Statistical Analysis

In recent years, interest towards visually guided autonomous robot has been the research area worldwide due to its outstanding applications in space, mining and under water environment. Despite it has these applications, generation of real time dense depth map for autonomous robots is a research problem that is still being explored. Radiometric variation present in stereo images pairs result in erroneous disparity maps. The proposed algorithm attempts to increase the accuracy of disparity map generated from images with radiometric variations through combining multiple cost functions in a fuzzy inference system. In the present research article, the authors analyzed the results of the mentioned algorithm through a statistical approach. Hence, this paper focuses on development of fuzzy logic model (FLM) based stereo matching algorithm for visually guided autonomous robot under different radiometric variations. This is followed by a statistical analysis on the results obtained from the proposed method. The experiments carried out were designed using Taguchi’s design of experiments (TDoE) and desirability function analysis (DFA) was used to identify optimum conditions for minimizing the errors. Finally, a second order model has been generated using response surface methodology (RSM) to correlate the errors obtained by FLM and RSM. From the results obtained through fuzzy stereo matching and response surface methodology, condition 2 (illumination 1 and exposure 1 for both the images) gave the lowest error of (6.7%) (6.8%) for α (0.9) and number of segments (800). Further from desirability function analysis, it is observed that optimal conditions for minimizing the errors (%) under different radiometric conditions is set at alpha (0.68) and number of segments (636). Finally, fuzzy stereo matching results and mathematical model results were fairly close for all tests. 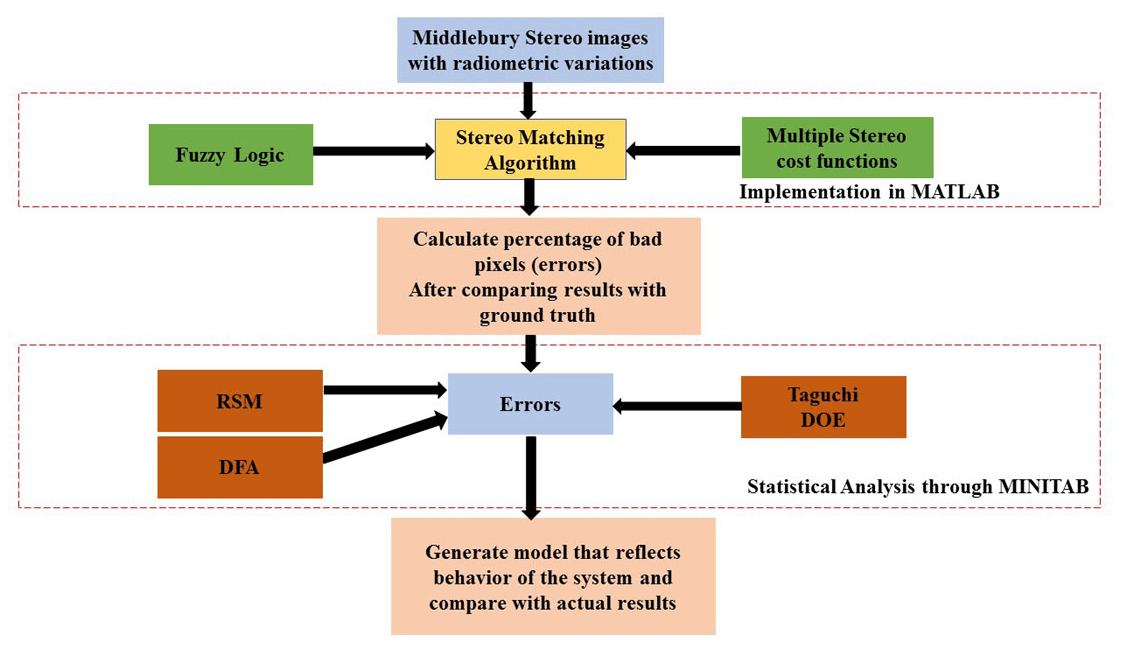 Fuzzy-logic based stereo matching algorithm is presented which makes use of statistical tools to gen....

Fuzzy-logic based stereo matching algorithm is presented which makes use of statistical tools to generate a model, representing the system.