An easy pyrolysis and activation synthesis method has been proposed to convert a common biomass waste of Euonymus japonicus leaves into nitrogen-doped porous carbons (NPCs), and its application in the removal of methylene blue (MB), methylene orange (MO) and rhodamine B (RhB) from simulated wastewater was further explored. The uptake of NPCs for dyes increases along with the initial dye concentration and contact time but decreases with the NPC dosage. The adsorption capacities of the NPCs for MB, RhB and MO were 626.1, 620.7 and 370.8 mg·g-1, respectively, which meant that the NPCs were better adsorbents for cationic dyes (MB and RhB), compared to the anionic dye (MO), because the NPC surfaces carry partial negative charges. In order to elaborate the adsorption mechanism, the kinetics data were analyzed by pseudo-first order, pseudo-second order, intra-particle diffusion and Elovich models, in which the pseudo-second order model exhibited the best fit. The adsorption data were evaluated by Langmuir, Freundlich, Temkin and Dubinin-Radushkevich isotherm models, in which the Langmuir model could well describe the adsorption processes. This study presented a potential alternative low-cost high efficient adsorbent for removing pollutant dyes from wastewater through using biomass waste leaves as sources. 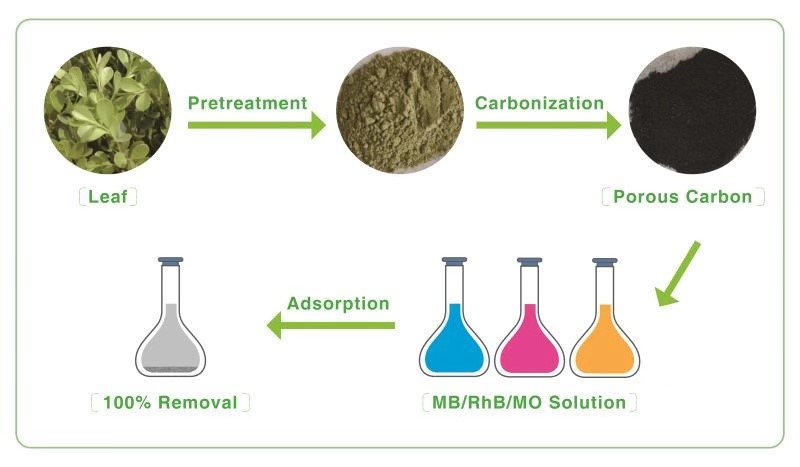 This article is cited by 23 publications.

This article is cited by 23 publications.