Motivated by the superior thermoelectric performance of two-dimensional (2D) materials, in this work, we investigate the thermoelectric properties of XTe monolayers (X= Ge, Sn, Pb) by using the first-principles calculation and the Boltzmann transport theory. The calculated results show ultra-low lattice thermal conductivities (kL) of XTe (X= Ge, Sn, Pb) as 1.3, 3.6 and 4.3 W/mK at 300K, respectively. Phonon analyses show that the ultralow kL stem from the coexistence of resonant bonding and weak bonding in XTe monolayers, as well as the avoided crossing between the longitudinal acoustic (LA) phonons and the low lying optical (LLO) branches in the Г-X and Y-Г high-symmetry paths. In addition, the band structure with “pudding-mold” type results in a high power factor for XTe monolayers. These features lead to high figure of merit (ZT) of XTe monolayers, which can reach more than 1.58 in the case of n-type doping concentration of 1019-1020 cm-3 at 900 K, and the GeTe monolayer bears the largest ZT of 4.23. The obtained ZT of XTe monolayers are larger than their bulk counterparts, and even outweigh that of other well-known 2D thermoelectric materials. Therefore, we propose XTe (especially GeTe) monolayers as promising candidates for high-efficient thermoelectric materials. 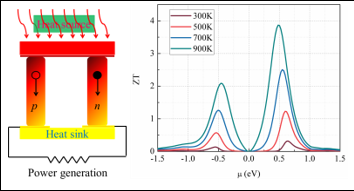 We found that XTe monolayers has larger ZT. The physical mechanism of high ZT is then revealed and d....

We found that XTe monolayers has larger ZT. The physical mechanism of high ZT is then revealed and discussed.