Thermal conductivity of vacuum insulation panels (VIPs) is lower than 2.0 mW/(m·K), about 1/10 of that of traditional thermal insulation materials. Nowadays, VIPs has been universally employed in some long-time applications, such as cold chain logistics and building skin insulation. The gas barrier envelopes play a vital role in maintaining the vacuum during the whole VIPs service life. In present paper, an aging model, employing the influence of moist air, has been developed to predict the long-term performance of VIPs. Three typical VIPs were produced with 3 different barrier envelopes, namely A, B and C. and 2 groups VIPs were put in 2 thermostat cases, which were maintained at 50℃ and 70℃ respectively. The experiment lasted for a month to evaluate the reliability of aging model. Comparing the theoretical calculation with the experimental data, conclusion was made that, the variation trends of thermal conductivity were almost the same for 3 envelops. The higher the temperature was, the faster the thermal conductivity increases. At 50℃, the initial thermal conductivity of A was the highest, and the thermal conductivity increased by 0.00015 W·m-1K-1 after a month in aging tests. The initial thermal conductivity of B was the lowest, but its permeability was high. The increment was 0.0003 W·m-1K-1, which was about twice as much as A. The performance of C was moderate, but its performance was greatly compromised at 70℃.The results indicated that the long-term performance of VIPs with A at 50℃ is superior to others. 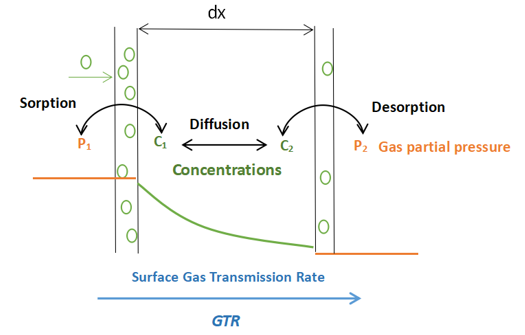 A prediction model is established to predict the service life of VIPs with Glass Fiber Core by Perme....