a These authors contributed equally to this work.

Different proportions of poly (butylene terephthalate) (PBT)/thermoplastic polyurethane (TPU)/poly (ethylene–butylacrylate–glycidyl methacrylate) (PTW) blends were prepared by extrusion and injection molding. In this study, the PTW effect on compatibility properties of PBT/TPU blends was investigated from morphology, mechanical and thermal properties of the blends. Infrared spectroscopy indicated that there were reactions between the hydroxyl or carboxyl groups in PBT and a small portion of the epoxy groups in PTW during melt blending, and these reactions benefitted PTW and PBT to form grafted structures, which were conducive to viscosity increase and affected the crystallization of the blend. The morphological images obtained by scanning electron microscopy showed that in the PBT/TPU/PTW blend, the TPU particles, as the dispersed phase, were well distributed, and the phase interface between TPU and PBT became less and less obvious as the PTW content increased. It was proved that the melting point (Tm) and the crystallization temperature (Tc) of the blend decreased with the PTW content increase by the differential scanning calorimetry. It was shown by the dynamic mechanical thermal analysis spectra that the compatibility of PBT/TPU blends was enhanced by addition of the PTW. Mechanical property measurements indicated that PTW could result in a significant increase in impact strength by about 315%, while the flexural and tensile strength of PBT/TPU blends decreased slightly. 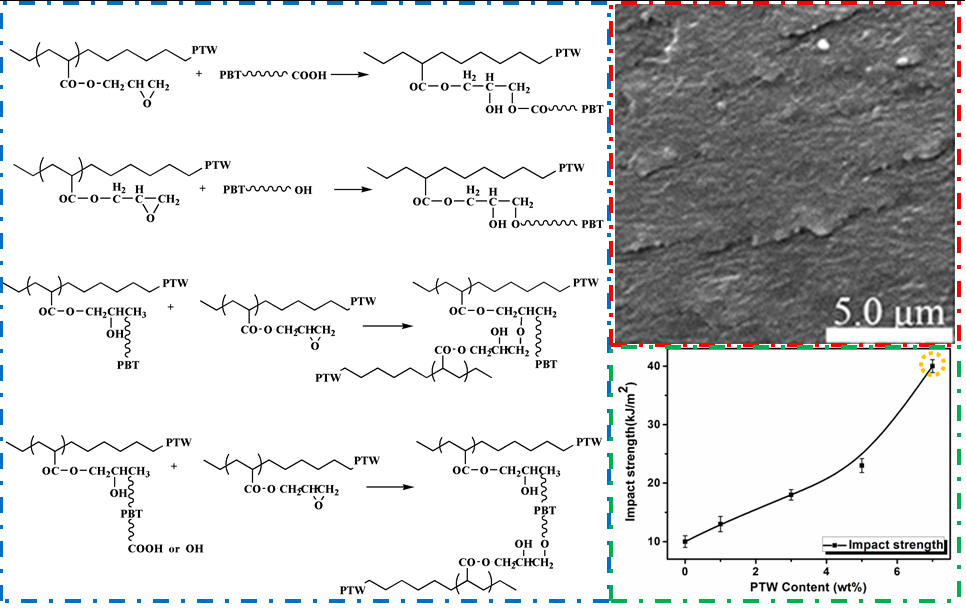 When the PTW content was 7wt%, a super tough PBT/TPU blend was obtained. ....

When the PTW content was 7wt%, a super tough PBT/TPU blend was obtained.