Herein, we report the synthesis of different ZnO nanostructures using chemical bath deposition method by changing the molar concentration of zinc precursor. The synthesized films were characterized using X-ray diffraction, UV-Visible spectroscopy, and scanning electron microscopy for different physico-chemical characterization. The obtained ZnO nanostructures were sensitized with melanin. We found that melanin incorporation in ZnO nanostructures extended the absorbance spectra into visible region. The maximum photocurrent density was recorded with ZnO film deposited for the molar concentration of 0.2 M. The rise might be attributed to the increased specific surface area, crystallinity, charge transfer and reduced recombination losses. The effects of synthetic melanin dye on all the synthesized samples had also been studied for the photoelectrochemical (PEC) study. Melanin incorporated ZnO photo-anodes showed a photocurrent density about twice that of bare ZnO photo-anode under one sun illumination. The obtained results demonstrated that melanin incorporated ZnO can be considered as a potential material for photo-anodes for photosplitting of water. 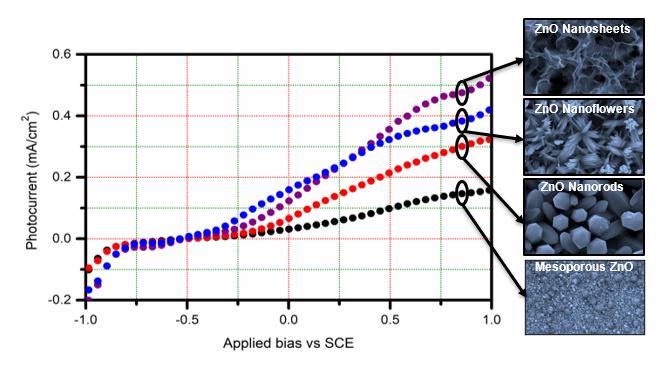