Investigation of Compatibility of Fluorine-Acrylic Emulsion and Sulphoaluminate Cement in the Design of Composite Coating: Effects of Sorbitol and Its Mechanism

Both fluorine-acrylic (FA) emulsion and sulphoaluminate cement (CSA) have been proved as satisfactory marine engineering materials, and a better performance can be expected by their combined use. However, their compatibility has rarely been researched. In this study, the effects of sorbitol and its mechanism are investigated by the cement paste fluidity, rheological property, tensile strength, water absorption and SEM tests. The results showed that, compared with sodium tripolyphosphate, borax and sodium gluconate, sorbitol can significantly improve the double electric layer of FA, and the absolute value of Zeta potential increased by 25% compared with the blank sample without any retarder added. With the increase of sorbitol dosage, the fluidity, rheological behavior, tensile strength and water absorption sharply changed first and then tend to be stable after sorbitol dosage reaches the optimal dosage of 0.25% for the compatibility improvement. The morphology analysis also proved its advantages, but the more significant improvement can be ensured by a larger p/c value. Finally, the mechanism hypothesis is proposed. The film formation rate of the emulsion matches the hydration rate of the cement, due to sorbitol addition. 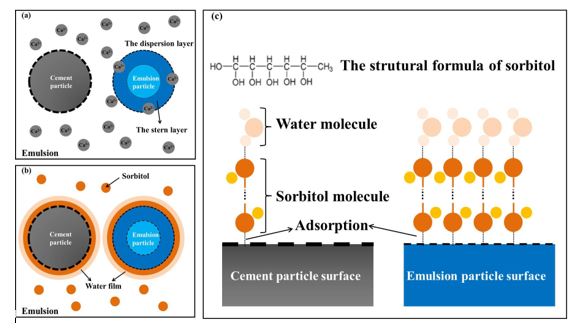 We found sorbitol as compatibilizer to improve compatibility between fluorine-acrylic emulsion and s....

We found sorbitol as compatibilizer to improve compatibility between fluorine-acrylic emulsion and sulphoaluminate cement and the mechanism hypothesis was proposed.