The degradation of volatile organic compounds using short wavelengths of ultraviolet is attractive to reduce chemical pollutants. This research focuses on the the photo-degradation of toluene, one of common volatile organic compounds that widely distributed in the environment, by experimental process using the irradiation of vacuum ultraviolet light. The performance and mechanism of the degradation process were systematically evaluated by changing core factors in experimental conditions: residence time, initial concentration, relative humidity, and degradation intermediates. Major finding was that the photo-degradation rate of toluene is inversely proportional to the concentration of toluene, on the other hand, proportional to the light intensity and relative humidity. This study also investigated the bond-dissociation energy of toluene under 185nm wavelength of irradiation and its molar absorption coefficients. Finally, the pathway for photodegradation of toluene was developed with a diagram of the chemical flow. The results are useful toward the air pollution research and its management applications. 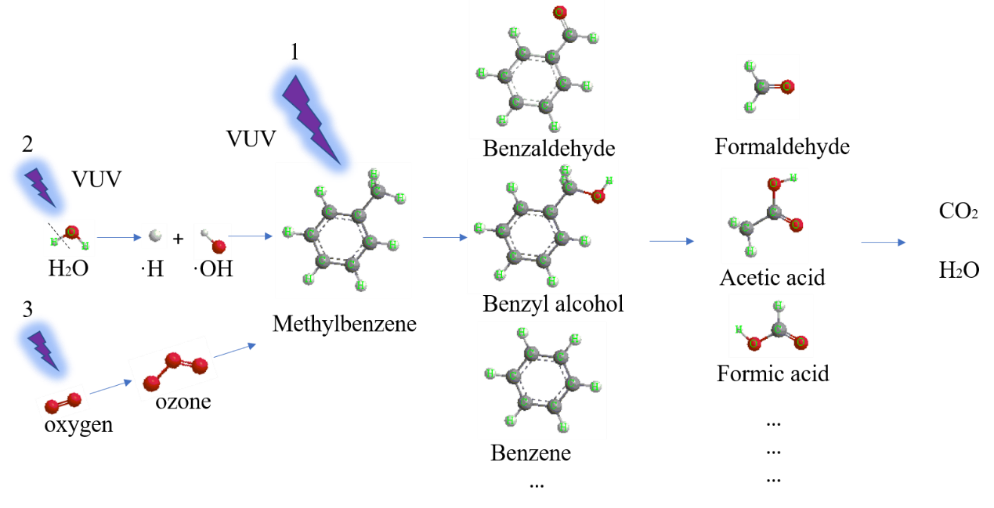 The role of UV light on the decomposites of toluene was investigated and the intermediates were analyszed to discloe the decomposition mechanism.

This article is cited by 11 publications.

This article is cited by 11 publications.