Effects of CuO Nanoparticles on the Growth of Kale

With the growing population and degrading environment, a new field of study is looking into the use of nanoparticles to enhance the quality and growth of crops, and to compensate for the sterilized soils. The present study was conducted to examine the effects of copper oxide nanoparticles (CuO NPs) on kale (Brassica oleracea) plant growth after treating its seeds with aqueous solutions with three concentrations of CuO NPs for 24 hours. The treated seeds were directly sown and the kale plants were harvested after 34 days. The results showed that the length of the roots and the shoots of the obtained kale were positively affected by the CuO NPs: larger increase came from the seeds treated with 70 ppm CuO NPs while both treated seeds by CuO NPs showed increased growth compared with the control sample. Moreover, the dry weight of the kale plants was also impacted by the treatment with CuO NPs: larger increase was produced from the seeds treated with 70 ppm CuO NPs relative to the control. This study shows that the application of CuO NPs at appropriate concentrations causes proliferation on the growth and development of kale. 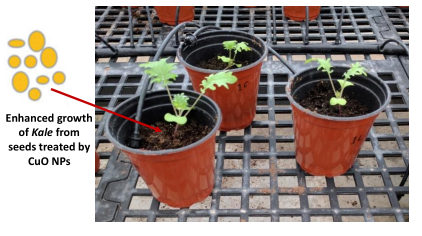 As an example of agri-nanotechnology, we showed that CuO NPs at appropriate concentrations enhance t....

As an example of agri-nanotechnology, we showed that CuO NPs at appropriate concentrations enhance the growth of kale.