Synthesized ceramic precursor of silicon-containing polyborazine (SPBZ) was introduced to fabricate the modified phenolic resins (SPBZ-PR), which was then performed as resin matrix to obtain carbon fibers reinforced SPBZ-PR (CF/SPBZ-PR) laminated composites via hot-compression. The incorporation of SPBZ could improve the thermal stabilities of PR, and the optimal decomposition temperature at 5% weight loss (T5) of the SPBZ15-PR (15 wt% of phenol to SPBZ) was increased to 406.8oC and the char yield at 1200oC still retained 70.3%, owing to borazine ring and formed SiOx structure during pyrolysis process. Furthermore, the CF/SPBZ15-PR laminated composites presented relatively higher ILSS, more excellent ablation properties and shape retention abilities than that of CF/PR laminated composites. The corresponding linear and mass ablation rate were both decreased from 0.013 mm/s and 0.033 g/s for CF/PR laminated composites to 0.0079 mm/s and 0.025 g/s, decreased by 39.2% and 24.2%, respectively. 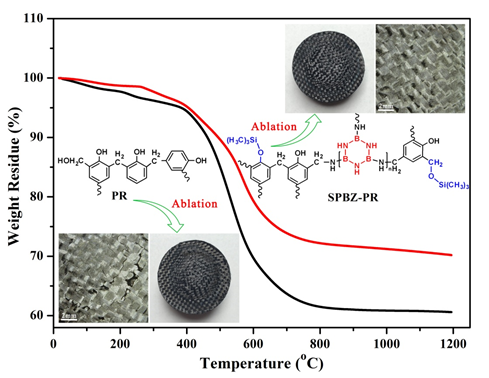